Plant a Garden Under A Glacier

When glaciers recede, or shrink in size, they often leave behind a Mars-like landscape: rocky, barren, and inhospitable to life. This is because when a glacier melts, it releases plenty of trapped rocks and mineral debris, but not a lot of the nutritional goodies that make soil a good home for bacteria, fungi, and plants.

At the base of a glacier, much of the soil is too nutrient-poor for plant growth. (Cordillera Vilcanota mountain range, Peru)

Recently, a team of scientists from CU Boulder, the University of Montana, and the University of Minnesota discovered how to make barren ground left behind by glaciers in Peru more accessible to life. But they were beaten to this discovery by the native vicuña—alpaca-like animals. The vicuña figured out exactly what the ground needed a long time ago: poop.

After a glacier melts in an extreme climate like the mountain ranges of southern Peru, the newly exposed soil stays bare for decades, or even centuries. Bacteria will slowly colonize it, followed by plants, but scientists didn’t know what the limiting factors are. That is, what resource (mineral or otherwise) could you add more of so that bacteria and plants would grow faster? Nitrogen? Water? Nitrogen is an element that all life needs to grow, and we know that all forms of life need water, so those were both good hypotheses proposed by scientists in the past. But plants need plenty of other elements, too. Many of these necessary elements might be limited in the shadow of a glacier.

In fact, the team of researchers found that plant growth in these areas is most dependent on another element: phosphorus. In a paper published in Science Advances, they proved this using a simple but incredible experiment at the base of a Peruvian glacier. The experiment lasted six years—and is technically ongoing—most of which time the researchers couldn’t even be in Peru to monitor the experiment directly.

To test the theory that phosphorus would help bacteria and plants grow on recently de-glaciered soil, the researchers marked off many plots at random locations next to a retreating glacier. These plots were devoid of plant life when they were marked off. Some of these plots were left undisturbed by the researchers—those were used as controls. The team sprinkled phosphorus in other plots, and nitrogen in yet more plots. Then they left Peru for an entire year before coming back to check on the experiment. Ecologists are nothing if not patient.

When they came back a year later, they were surprised and excited to find that phosphorus made an enormous impact on the ability of bacteria and plants to grow in the rocky plots. Steve Schmidt, a professor in the Ecology and Evolutionary Biology department at CU Boulder, was thrilled to see results so quickly.

“It had already drastically changed in one year,” said Schmidt. “After one year we were already seeing that in the plots that got phosphorus, little plants were starting to sprout.”

Jack Darcy, a PhD student in Schmidt’s lab at the time and the first author on this study, was similarly excited.

“That was totally crazy,” said Darcy. “We kind of expected maybe a couple of mosses… we expected a finer change in the plots, or even no change at all. But there had already been plant colonization within the year.” 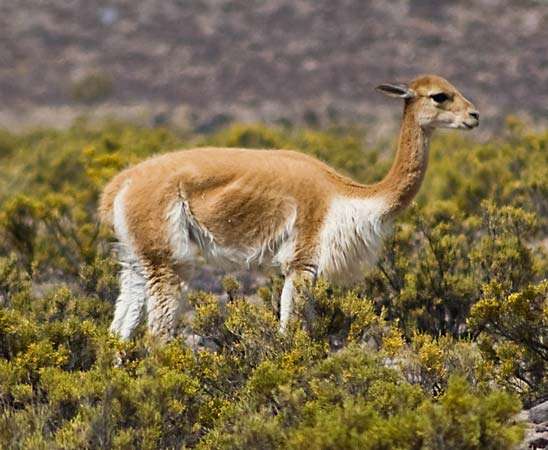 This is a vicuña.

While the researchers celebrated their plant growth, vicuña—nimble, furry, alpaca-like beasts that roam the area—must have been looking on with mild bemusement. All those humans going through so much trouble to grow a few scraggly plants! Vicuñas had figured out to how to help plants colonize the harsh landscape long ago. The secret? Poop on it.

Vicuñas have a strange habit in common with humans: they all poop in a single location. Like humans defining a “latrine area” at a campsite, individual vicuñas in a pack all poop in the same place, forming piles of feces at various places along their migration routes. Steve Schmidt found that these piles of poop, called “middens”, fostered the growth of plants. Where there was a midden, there were bushy, thriving plants even at very high elevations.

In a way, the vicuñas had carried out a very similar experiment to Schmidt and company—they chose a small plot of land, added some fertilizer, and let nature run its course. 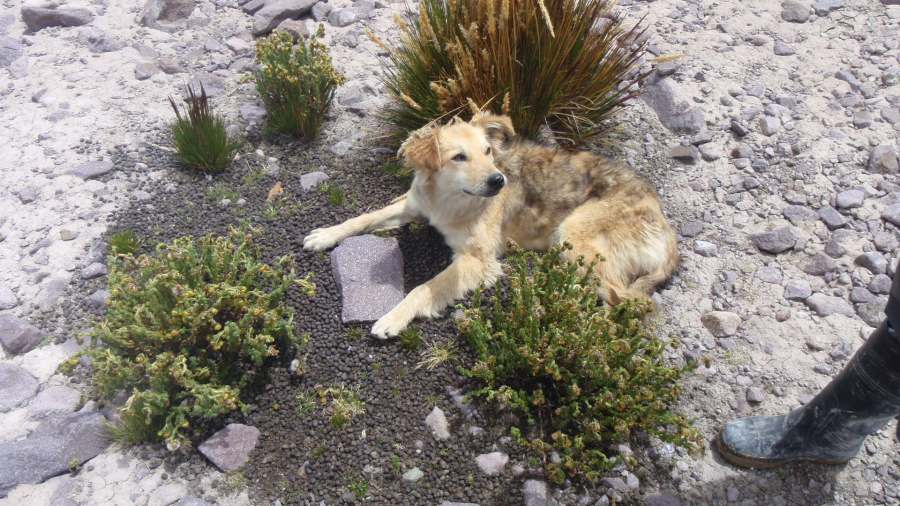 “You could say the vicuñas scooped us,” said Darcy, good-humoredly. “They pooper-scooped us.”

Of course, the vicuñas weren’t carrying out controlled experiments, and there are far too many components of vicuña poop to figure out which element was the limiting factor of plant colonization on rocky, recently deglaciated ground. But it’s amazing to see the drastic difference a little bit of manure makes in these fragile ecosystems.

Schmidt is returning to Peru this year to look at the plots again, and also to study the middens. Meanwhile, in lab, he’s creating “microcosms”—little dishes of soil taken directly from the glacier site, that he can experiment on in a more controlled environment.

Using these dishes, he can carry out lots of small scale, easily repeatable experiments to confirm the results from this experiment and to create new hypotheses. Presumably this all requires opposable thumbs, so at least scientists are a step ahead of vicuñas in this case.