Kika has more interesting hobbies then you can shake a stick at, and beautiful photos to back up her commitment to design and artistry. 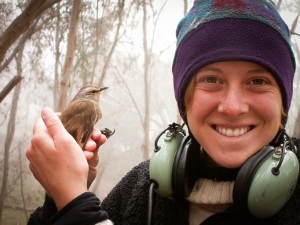 Be warned: after you finish reading this Snapshot you will probably feel the sudden need to explore your right-brained side. I definitely came away from my interview with Kika Tarsi with a commitment to try something new and artistic. Kika, a 5th year graduate student in the Ecology and Evolutionary Biology Department, has more interesting hobbies then you can shake a stick at, and beautiful photos to back up her commitment to design and artistry.

Kika’s graduate project involves the Wog Wog Habitat Fragmentation Experiment in New South Wales, Australia. This experiment began in the 80’s, when the Australian government was rapidly leasing huge swathes of land to pine plantation companies, and scientists convinced one of those companies to turn their land into an ecological experiment. Most of the land was cleared as planned, but a few plots were preserved as “habitat islands”: perfect squares of native environment surrounded by razed trees where pines would be planted.

Using low-tech pitfall traps, scientists can collect samples of the wildlife active in these habitat islands–everything that falls in gets collected and studied. Other members in Kika’s lab study beetles and ants, but Kika studies Lampropholis guichenoti, the common garden skink. She has seen two important trends: first of all, this lizard experienced a population boom after the fragmentation of its habitat, but that boom has since disappeared and lizards persist at much lower numbers these days. Secondly, the lizards in the habitat islands shrank in body size immediately after fragmentation, but their average size has been restored over the past 26 years to pre-fragmentation levels.

Kika attributes these size declines to fragmentation-driven temperature increases, as studies have shown that a hotter rearing environment will result in smaller individuals in most ectothermic species, a relationship known as the temperature-size rule. When the lizards’ habitats were reduced in size, they also got much warmer because there was less tree cover. When pines began filling in the cleared areas, the habitats became cooler again and the lizards got bigger. These results prompted Kika to remind environmental scientists to consider how temperature affects regions that are being deforested–especially when the regions contain species that are deeply sensitive to temperature changes, such as ectotherms.

But nobody can spend every waking moment thinking about the size of lizards, and Kika has found multiple ways to stay sane during her years of research. Her website immediately draws you in with beautiful photographs, and she describes herself as a “wildlife photographer with a weakness for soft light and scaly creatures.”

“Nature photography seems like a natural extension of my graduate work,” she said as she showed me some of her photos. “We’re in a sad place right now with so many species disappearing, and I feel compelled to capture the diversity I can see.”

She primarily uses macro photography, which has a narrow depth of field and intense detail–creating intimate interactions with the creatures she captures by camera. So far, she says, her favorite place to shoot has been South Africa, where she was first inspired by the beautiful pictures that other students traveling with her had acquired.

Kika’s other great love is DJing, something she’s wanted to do since she was 14 and going to underground dance parties with her older sister. After many years of thinking about making her own music, she finally decided to try it out.

“I realized I’m an adult,” she says, “And I can spend all my money on DJ equipment and live on ramen if I want to!”

The investment paid off– after taking a DJing class in Denver, Kika bought a Traktor S4 turntable and has been DJing ever since. Her first party soon led to a show at a local co-op on Halloween: “It was completely packed, people were climbing on things and dancing all over the place– it was the best experience I’ve had so far.”

She also DJ’d the EBIO department’s holiday party, which was held in a greenhouse lit up by strings of lights, and she even DJ’d her own wedding, despite, in her own words, “questioning my own sobriety”. Her favorite genre is electro swing, and she also plays a lot of “deep house”–which she makes sure to point out is distinct from regular house music.

If these two extracurricular activities weren’t enough, Kika’s newest obsession is making terrariums. This hobby started when she designed one for her own pets–she owns 5 tree frogs, two of which came from a disease experiment performed on campus (don’t worry, the ones she brought home weren’t infected). Her terrariums are entirely self-sustaining and elaborately crafted from materials like styrofoam, insulation foam, gorilla glue, dirt and plants. They’re beautiful and functional, the perfect art project for an environmental scientist.

Kika plans on giving her exit talk on April 24th, 2015, and invites all interested parties to attend. “I’m aiming for something like Radiolab,” she tells me, and I imagine if anybody can pull off a unique soundscape-style format like that, it would be her and her multidimensional mesh of science, music, and art.