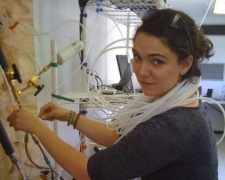 It’s not often that science and spirituality see eye-to-eye, but for Amber Ortega, spirituality and scientific research cooperatively shape her professional and personal pursuits. How did this recent Atmospheric and Oceanic Science graduate end up becoming a priestess of the ceremonial arts? A lifelong journey motivated by connecting science, policy, and those affected by science policy have defined the researcher and spiritualist that Amber is today.

Growing up near Louisville, Kentucky, one of the stormiest parts of the US, Amber developed an early interest in forecasting the very thunderstorms that terrified her. By the age of eight, Amber had taught herself to read Doppler radar in her parents’ basement. As a self-described “weather-nerd” through high school, Amber remained fascinated by meteorological happenings but less-than excited about traditional academic pursuits. Although more interested in her work in graphic design at a vocational school, at the bequest of her parents Amber decided to apply to one four-year college.

When she realized she could take her weather-prediction hobby with her, Penn State’s meteorology program was an obvious choice. Amber went on to earn her Master’s degree at Penn where she caught the “field work bug” during a research stint at UC Berkeley Blodgett Forest Research Station in 2007.  Encouraged to continue these pursuits, Amber was lured to CU Boulder by a prestigious Chancellor’s fellowship as well as outstanding field research opportunities studying the earth’s atmosphere.

During her PhD research, Amber immersed herself in studying air pollution. Under the mentorship of her advisor, Jose Jimenez, Amber traveled the world measuring pollutants in air. Using a specialized instrument called an aerosol mass spectrometer aboard a uniquely equipped aircraft or located at a ground site, Amber was able to carefully assess the amount and kind of chemicals emitted in various conditions. She flew with her mass spectrometer through wild fires, through clouds and thunderstorms, over urban areas, and a station in the seemingly pristine, remote country-side of rural Spain, all the while measuring the components of the air around her. She was then able to model her findings and predict the future composition of various atmospheric pollutants using a specialized flow tube reactor.

Though passionate and successful in her scientific pursuits, Amber wanted to expand on these endeavors beyond traditional academia. More importantly, Amber felt strongly driven to connect with those outside of the university setting, whether through teaching, outreach to disadvantaged communities, or grass roots environmental activism. In an effort to deepen her connection to both her science and her spirit, as well as to better connect to others outside of academia, Amber added a unique component to her graduate school experience when she enrolled in a three year spiritual training program at Starhouse.

Although initially motivated by her spiritual connection to yoga and nature, the Starhouse program provided more profound guidance in living a sacred life and becoming a steward of the Earth. At Starhouse Amber completed her training as a Priestess of the Ceremonial Arts (PCA) and has since found herself better able to connect to those with different beliefs about important environmental issues like climate change.

Although they seem to be disparate paths of study, Amber found that her spiritual training complemented her academic training in a powerful way. Not only could she better access compassion and relate to others about the importance of science in caring for the Earth, but she found that the very survival of her PhD work tied to the improved self-care she learned during her spiritual training.

Amber defended her PhD thesis in January and begins post-doctoral research at the University of Arizona in Tuscon this March. There, she hopes to combine her four passions: teaching, outreach, field science, and instrumentation.