Scientists and engineers have been tinkering with lasers since the 1950’s, building a world in which lasers have become ubiquitous in our daily lives.

Scientists and engineers have been tinkering with lasers since the 1950’s, building a world in which lasers have become ubiquitous in our daily lives. You are probably familiar with lasers in CD players, barcode scanners, presentation pointers or cat toys. Lasers have also become an enormously important tool in the pursuit of scientific discovery. Lasers give scientists the ability to carefully control the interaction of light with matter in space and time, yielding information about the fundamental nature of materials. One Nobel-worthy example was pioneered at CU Boulder: the formation of Bose-Einstein condensates, a new state of matter which couldn’t have been created without lasers.

The word ‘laser’ is an acronym, standing for light amplification by stimulated emission ofradiation, which describes the process by which a laser beam is formed. Sparing the details, this process results in a narrow beam of photons with identically oscillating electric fields. Lasers can also be pulsed, resulting in bursts of photons instead of a continuous flow. For years scientists have been making laser pulses shorter and shorter, pushing the fundamental limits of physics, arriving at the current record of 67 attoseconds. That’s 67 x 10-18 seconds, or 67 quintillionths of a second!

These extremely short laser pulses allow scientists to measure other extremely fast events. Just as the shutter on a camera determines how short of an event you can capture in a photo, the duration of a laser pulse determines the shortest event the pulse can measure. If the pulse isn’t short enough, the results will not be resolved enough to capture the event clearly – like a blurry photo.

Studying fast events with ultrashort laser pulses has been within scientists’ toolbox for some time, but recently researchers in the Department of Physics and JILA at CU Boulder discovered a completely new method of probing a material’s properties with lasers. The team published their work in ACS Nano. First author Dan Hickstein explained to me how this intriguing project evolved. 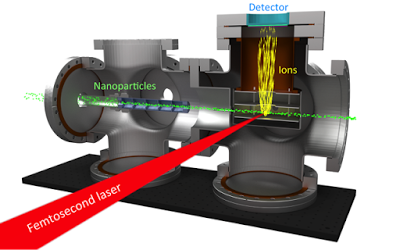 Plasma explosion imaging apparatus. Ultrashort laser pulses collide
with a beam of nanoparticles, generating ions that are directed toward a
detector above the collision.

The research team, led by Professors Henry Kapteyn and Margaret Murnane, wanted to observe how lasers interact with nanoparticles in the gas phase. So, in collaboration with Professor Jose Jimenez’s group, they built a system to do just that. Using what Dan describes as a “tube full of carefully machined washers” (it’s actually called an aerodynamic lens), nanoparticles can be directed into a vacuum chamber as a collimated beam, similar to a laser. A beam of ~50 femtosecond (1 fs = 10-15 s) laser pulses intersects with this particle beam at a 90 degree angle. Looming overhead, a detector measures any ions, or charged particles, generated by the laser-particle interaction (Figure 1).

In materials research, nanoparticles offer exciting opportunities to discover new physics and chemistry because they behave differently than much larger chunks of the same material. Generally 1-100 nanometers in size, nanoparticles have wide ranging applications including biological imaging, drug delivery, solar energy conversion, chemical catalysis, and even making lasers. Dan and fellow graduate students in the Kapteyn-Murnane lab wanted to study nanoparticles in the gas phase because this removes the effect that the environment – the solvent or other nearby molecules – has on the nanoparticles.

The research team expected the laser to ionize the nanoparticles, kicking off electrons that would show up on the detector, but when the apparatus was fired up nothing seemed to happen. “We hadn’t really done the calculations to realize that the volume of the focal spot versus the particle density in the particle beam was such that we were only going to hit a particle every few seconds,” explains Dan. “We spent a long time trying to align the laser with the particle beam, and then, all of a sudden we saw the ion detector light up brighter than we had ever seen before.” The researchers quickly realized that the sporadic but intense signal they observed was from a laser pulse hitting a single particle at a time. “It was not at all what we intended to do. But we quickly realized the ability to look at individual nanoparticles could be very interesting,” Dan points out.

Although the laser intensity used was not enough to significantly ionize gas-phase atoms or molecule, it kicked off many more electrons than expected, resulting in a plasma being formed within the nanoparticle. Plasma is a phase of matter distinct from the solid, liquid, and gas phases we normally think about. A plasma is made up of free electrons and positive ions, and plasmas are often made by applying a strong electric field to gas particles. When a laser crosses paths with matter, the electric field of the laser is applied to the atoms, and can ionize them if it is strong enough. This generates a few free electrons which act as seed electrons to ionize nearby atoms. The seed electrons are accelerated in the laser’s electric field, smashing into other electrons with enough energy to free them, leaving behind a positive ion, and the process continues like an avalanche. In the end, normal atoms are turned into an expanding plasma that eventually explodes, spewing out electrons and ions in many directions.

Waiting above this remarkable collision of ultrafast pulses of light and nanoparticles, the ion detector measures the direction and speed with which ions explode out from the nanoparticles. An electric field directs ions towards the two-dimensional detector, where they land with some displacement from the center and are counted. This generates a 2D map of the way in which the plasma explosion occurs. The research team dubbed this brand new technique “plasma explosion imaging.”

Pouring over almost a terabyte of these 2D maps, Dan and the JILA team noticed certain trends for the different types of particles used. For example, nanocrystals of sodium chloride always explode in the same direction that the laser is traveling. Asymmetric nanoparticles composed of a polymer with a single gold nanocrystal embedded in the surface explode in a different direction every time (Figure 2).

Since plasma formation depends on strong electric fields, the location of the plasma explosion should correlate with the strongest electric field. Metallic nanoparticles are well known for their ability to hugely enhance electric fields at their surface, and nanoparticles of other materials have been known to demonstrate modest enhancements.

“In the case of the gold particles, if you have a plasma forming on one corner of this particle it acts like a cannon and shoots off ions in a particular direction,” Dan explains. This clarifies why the asymmetric polymer/gold nanoparticles had such variable behavior – the gold particle was in a different position every time it was hit by the laser.

Dan is also quick to point out what would happen without ultrashort laser pulses; “The plasma formation happens really fast, within a few cycles of the laser field. You need short laser pulses to see this directional ejection. Otherwise in every case you would have enough time to turn the whole nanoparticle into a plasma. And we need to keep the laser at just the right intensity, because the nanoparticles are hilariously easy to explode if the laser intensity is just a little too high.”

In total, Dan and his labmates imaged four different types of particles, observing four distinct behaviors in the plasma explosion (Figure 2). In addition to sodium chloride and asymmetric polymer/gold nanoparticles, aggregates of titanium dioxide and polymer/gold nanoparticles made up of several gold particles embedded in the polymer were imaged. Although all four of these nanoparticles were roughly 100 nm in diameter, the details of their morphology and materials properties led to very different plasma explosions, revealing exactly where light was absorbed and where the electric field was enhanced.

Interactions of strong laser fields with nanoparticles have incredible applications. A potential treatment for cancer utilizes gold nanoparticles that localize within tumors. When irradiated with a femtosecond laser pulse, these particles can produce a shockwave that destroys the tumor but minimizes damage to healthy tissue. In a completely different arena of science, nanostructures irradiated with a laser have been found to accelerate electrons, suggesting they may be able to act as mini particle accelerators. These new realms of scientific inquiry are exciting, but can only move from proof-of-principle experiments to usable science with a complete understanding of the fundamental physics involved. With its ability to directly observe absorption of light by a single nanoparticle, plasma explosion imaging is a powerful technique with which to unravel the fundamental behavior of nanoparticles in a laser field.

In other words, this work is uncovering fundamental physical behavior by blowing up tiny particles one by one with powerful, ultrashort laser pulses. That is just cool.

Dan’s publication on plasma explosion imaging can be found here.