NextExercise, Microbiomes, and You
#ThanksScience

#ThanksScience – Selfie Culture, brought to you by the Charge Coupled Device (CCD)

The value of basic science has become a heated debate in politics. 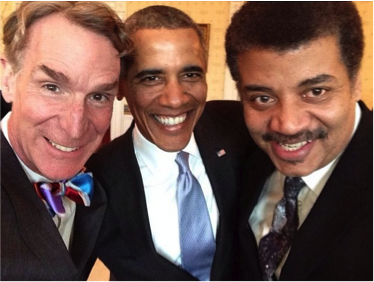 Brought to you by the CCD: A selfie of Bill Nye, President Obama
and Neil deGrasse Tyson

The value of basic science has become a heated debate in politics – lawmakers the have berated the NSF for “wasting” money on research that, they claim, doesn’t align with our nation’s interests. Yet, we’ve seen countless times how basic science unexpectedly leads to huge advances in technology, and subsequently how we go about our everyday lives. Unfortunately, the history behind new technologies is not often acknowledged – when new tech is constantly becoming available, we take for granted the innovative science behind our latest gadgets.

Here at Science Buffs, we aim to highlight how science is important for everyone. This new series, lightheartedly dubbed #ThanksScience, will bring you short stories of basic science so entrenched in our everyday lives that we hardly notice it’s there.

In 1969, George Smith and Willard “Bill” Boyle inadvertently discovered a ground-breaking technology. Their Charge Coupled Device, or CCD, would soon become the first “electronic eye,” replacing film photography and revolutionizing imaging technology. It would result in applications ranging from the Hubble space telescope to Instagram. But at the time, Smith and Boyle were just physicists trying to keep their lab afloat. In order to prevent their semiconductor electronics department at Bell Labs from losing funding, they were asked to compete with another division to create an electronic memory device. Such memory devices were needed in most advanced electronics, including early computers. In answer to this challenge, Smith and Boyle sketched out the design of the first CCD in just one hour. Within a week, prototypes were built, tested, and declared a success – but for memory, not for imaging. So how did the CCD go from being a memory device to Kim Kardashian’s best friend?

At the same time that Smith and Boyle were developing the first CCD, Bell Labs’ parent company, AT&T, was trying to commercialize their “Picturephone” – one of the earliest video chatting devices.  Since the very first days of telephone technology, companies were certain that people would want to see video of each other while talking on the phone. This makes sense – a large part of human communication is nonverbal, consisting of facial expressions, gestures, and posture. AT&T began developing the Picturephone in the 1930s, but it wasn’t until the ‘60s that the technology was advanced enough to warrant commercial use.  At the 1964 World’s Fair, the Picturephone made the world’s first transcontinental video call, and AT&T began installing Picturephones in the offices of tech companies and popular train terminals.

By 1969, the Picturephone was desperately in need of large advances in imaging tech that would bring down cost and improve video quality. Cutting-edge imaging devices for the Picturephone were being developed at Bell Labs, which Smith and Boyle heard about from their colleagues. This sparked an idea; the CCD works by converting light into an electronic signal, just like an imaging device – so wasn’t it actually an imaging device? With just a few improvements to their original design Smith and Boyle confirmed that the CCD did have excellent imaging capabilities. It was much faster and had better resolution than any other imaging device at the time. Although the Picturephone ultimately became a commercial failure, research and development of CCD technology for imaging exploded.

Compared to photographic film, CCDs are one thousand times more sensitive to light. It is no surprise that CCDs became used in digital cameras, scanners, medical devices, fax machines, bar code readers, satellite surveillance, and more. CCD brought  improvements in imaging quality to astronomy that resulted in the first experimental verification of dark matter and the unprecedented images collected by the Hubble space telescope. In 2009, Smith and Boyle were recognized for their groundbreaking discovery with the Nobel Prize in Physics.

But the most significant impact of the CCD on our everyday lives is the ability carry around high quality cameras in our pockets. With the rise of smartphones, we can snap a picture of our food, our pets, or ourselves, and instantly share them on social media. Platforms like Facebook, Instagram, Twitter, Snapchat, and YouTube all exist, in large part, because of the CCD. We can take pictures and videos of important events – political rallies, protests, natural disasters, adorable animals– and document our own social and political revolutions. More than ever before, we are able to communicate worldwide in a highly visual way.

Although a related technology, called CMOS, is now used more commonly in smartphone cameras, the CCD brought snapping pictures to the masses. So, thanks George Smith and Bill Boyle, for ushering us into the era of rapid visual communication, including #selfies. #ThanksScience #SmithandBoyle #TechIsCool #ScienceRules #SelfieCulture #Science