Popular shows like Ghost Hunters suggest that ghosts are just a sixth sense away—what are the scientific theories and methods behind this conclusion?

On this, the spookiest of seasons, Science Buffs is releasing another installment of our Science of Science Fiction series. Popular shows like Ghost Hunters suggest that ghosts are just a sixth sense away—what are the scientific theories and methods behind this conclusion?

Dressing as a ghost for Halloween is the simplest costume. Cut two eyes in a sheet and yell “Boo!” at people and you’ve got yourself a ghost. In contrast, the science describing ghosts and methods to detect them is anything but simple.

Ghosts are believed to be the soul or spirit of a deceased person or animal that can appear to the living. Many people around the world have seen them, or have claimed to see them. In fact, trying to observe the paranormal, sometimes called “ghost hunting”, has always been a popular endeavor. On the Syfy network alone, there have been at least nine major shows over the years that are dedicated to observing paranormal activity, including the popular series Ghost Hunters. On these shows, many of the researchers attempt to use technological and scientific approaches to detect spirits. As scientific methods have advanced in other areas of study, some of those methods have been applied to ghost hunting. 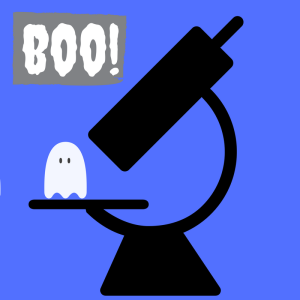 Professor Johnjoe McFadden from the School of Biomedical and Life Sciences at the University of Surrey has theorized that the conscious mind is made of an electromagnetic field. This cannot be completely dismissed—the bombardment of electrical impulses in the nerves of the brain creating our thoughts and feelings, is much like an alternating current system. Our neurons definitely produce electromagnetic fields, whether or not this is the basis of consciousness.

MacFadden argues further, using basic theories in physics, that this electromagnetic field cannot disappear when we die. The law of conservation of energy states that energy can neither be created nor destroyed; rather it can only be transformed from one form to another. Theoretically this means the energy from the recently decease’s consciousness could be detected by the electromagnetic field meter.

This theory relies on several false assumptions. For example, to be detected by the electromagnetic field meter a ghost would need to be made of the same moving charges that create the electromagnetic field, such as the firings of neurons. However, we know that the firing of neurons ceases after death—partly because the biological basis of a maintained voltage (for example, ion channels in the brain) breaks down. Therefore, the alternating current system would not be “on” and would not be creating an electromagnetic field. Moreover, the energy from a living body probably dissipates into the environment after death. In order to detect a ghost made up of an electromagnetic field, it would need to be from a very recently deceased individual. This fact makes it hard to believe you could observe the spirit of a human being from hundreds of years ago.

Connor Randall is a local paranormal researcher who has worked with Frontrange Paranormal Investigations for seven years, and was a resident paranormal investigator at the Stanley Hotel for four years. He recognizes the flaws of trying to equate electromagnetic field detection with the presence of a ghost. In fact, he doesn’t use electromagnetic field meters very much anymore.

“I used to use them more often, but the more and more I looked into it the more I really think they they’re useful for special circumstances,” said Randall in an email. “I’ve found that they are actually better for disproving ghosts, which if possible should be a priority of an investigator looking into issues at someone’s home.”

Rather than focus on electromagnetism, Randall tries to detect other ghostly signals. Randall’s favorite technological tool to locate paranormal activity is called the Spirit Box. This is an AM/FM scanner, supposedly modified to help pick up the spirits’ voices.

“Along with my teammates at the Stanley, we developed something we called the Estes Method,” said Randall.  “One of us will listen to the quick scanning radio feed totally blocked off, with soundproof headphones and a blindfold, while the other investigators in the room ask questions and we see if any voices the person who is listening hear corresponds.”

Randall and his team are working to improve this method of paranormal research.

“One of the best phrases I’ve been told by my fellow researcher is ‘dogs can’t see rainbows’. But that doesn’t mean that rainbows don’t exist in the same plane of existence that the dog does,” said Randall.

In other words, we can’t perceive much of the electromagnetic spectrum with our eyes and ears (infrared radiation, ultraviolet rays, microwaves, etc) but that doesn’t mean it isn’t there. Randall and others believe that spirits might be manifesting on some level beyond our perception. With that in mind, researchers use devices such as thermal cameras, high quality audio recorders and motion detectors in order to be able to tap in to what we might not be able to see.

As with any scientific problem, we end up with more questions than answers. Then again, maybe we should just let the mysteries of the supernatural be just that; mysteries.

Interested in Connor Randall’s work with the paranormal? Check out his team’s Facebook page and web series:

Spirits of the Stanley: https://www.facebook.com/SpiritInvestigationsTeam/