Zac Holmes is a talented biochemist who is finishing up his final year in graduate school while studying to take the Patent Bar Exam. Much could be written about Zac’s impressive professional endeavors, but today we’re here to talk about his bees. 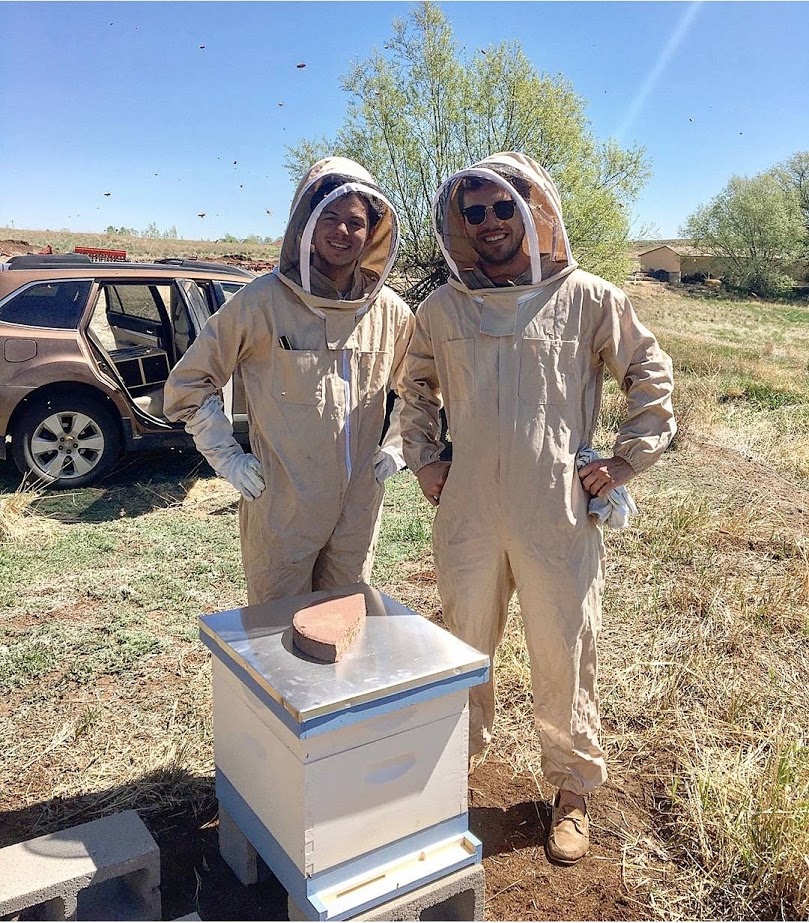 Zac and his fiancé, Jeff Stehlin, are amateur beekeepers who set up their first bee box this year. Zac and Jeff trek to northern Longmont once a week to make sure their bees are flourishing; on this crisp Sunday morning, they have kindly allowed me to tag along. We arrive at a line of innocuous-looking wooden boxes on the edge of a field; the one at the end of the line belongs to Zac and Jeff.

Before we approach the bee box, we deck ourselves out in protective gear. Zac and Jeff have lent me a full-body bee suit. The suit features an attached hood, which is propped up by an arching wire frame that holds the fabric and mesh out from my head. Zac’s suit only covers the top half of his body and involves a wide-brimmed hat dripping with mesh. This is a much more flattering look than full-body khaki, but it leaves his jean-clad legs vulnerable to bee attacks.

The bees are not thrilled to see us, and I can’t say I’m thrilled to see them either. I thought I would be – I’ve been eager to visit the hive since Zac and Jeff first set it up – but the bees are agitated and terrifying. “A box of maniacs,” as Sylvia Plath described her own hive in “The Arrival of the Bee Box,” a poem that I highly recommend if you want to understand this overwhelming sensory experience but don’t have a crate of bees readily on hand. Once Zac and Jeff’s bee box is opened, the noise is all-consuming and the maniacs are upon us.

“These are just guard bees,” says Zac as he smoothly pulls a bee-covered frame from the box. He is calm and cheerful, despite the dozen or so bees that are now crawling on him, probing for vulnerabilities. “Oh look, she’s really trying to get at me. See how she keeps throwing her abdomen?” One of the valiant sentries has landed on the mesh shield that hangs an inch from Zac’s face and is determinedly plunging her stinger towards him again and again. I withdraw my face as far back into the bee suit as I possibly can. 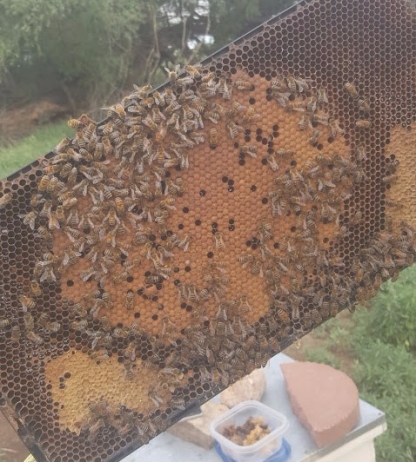 Bees on a hive frame (@Beeyond_Buzzd)

Craven bee avoidance tactics will allow me to escape this adventure unscathed, but Zac receives four stings through his jeans almost immediately. The bees are apparently more agitated than usual today, so Zac and Jeff decide to light their smoker, a steampunkish contraption like a watering can with a silent accordion attached. The smoke immediately causes the aggravated bees to retreat into their box. Jeff explains that the calming effect of the smoke is not entirely understood, but that some people believe it prevents the bees from using their pheromone-based communication to mount a coordinated defensive operation.

Now that the guard bees are subdued, Zac continues to examine each panel of the hive and teach me about bees. He points out where the bees have made honey and sealed over the comb with wax. We see several yellowjacket wasps trying to remain incognito while they break into the honeycomb, but the bees are good at thwarting these honey heists. Zac describes how to distinguish the female worker bees from the male drones. He points out something called a queen cup, which looks like a mid-century modern ball chair, only tiny and made of wax. The worker bees maintain the queen cup as a precautionary measure; if the queen suspects she might not be able to fulfill her royal duties for much longer, she will lay a successor in the cup.

The queen cup is empty, but the queen herself is nowhere to be found. Zac says that not seeing the queen is not necessarily cause for alarm, but he does seem troubled that we haven’t seen any eggs or larvae either. Bees perform different jobs at different stages of their lives, and the workers only live for approximately three weeks. This makes it crucial for the queen to lay new eggs to replenish the workforce; that she doesn’t seem to be doing so may bode ill for the hive.

The current queen, christened Hillabee Clinton, is this hive’s second. The unnamed original queen, whom Zac and Jeff bought from a bee supplier, had been improperly bred and only laid male eggs.  Apart from breeding purposes, male drones are useless to the hive – so useless that before the winter, the female worker bees will chew off the wings of the resource-mooching drones and kick them out of the hive to die alone. So a queen that only laid male eggs was bad news. Zac and Jeff needed to find a new queen quickly before their hive collapsed. Fortunately, they encountered a swarm of wild bees and were able to incorporate that queen and her court into their existing hive. Hillabee Clinton has been with them ever since, but today she is missing in action.

Zac and Jeff decide not to worry about Clinton’s whereabouts until they have contacted their beekeeping mentor. While the pair seem to be natural born apiarists, this is their first year with the hive and they are still learning all the bees’ seasonal quirks. They have found a beekeeping guide in a local honey maven, who has given their hive a space alongside eleven of her own.

When Zac and Jeff talk about their mentor, they are reverent. She would never have to use a smoker, they say, because the bees are never agitated in her expert hands. While we are fully arrayed in bee-deterring gear (“I’d recommend a pair of thick socks,” Zac texted me in preparation of this visit. “The bastards have gotten us in the ankles a couple of times.”), their mentor wears sandals to tend to her bees. Unintimidated by hungry bears that menaced some of her hives, she simply built an electric fence to protect her bees. She takes on a mythical quality in my mind.

Beekeeping is complex and requires a considerable start-up investment, so having a mentor makes all the difference. To offset this inaccessibility for others, Zac and Jeff have been extremely enthusiastic and generous in sharing their experiences as fledgling beekeepers with as many people as possible. They frequently bring visitors to the hive, and they document their adventures in beekeeping on an Instagram account (@Beeyond_Buzzd) that is teeming with fascinating bee insights and well-crafted puns.

After Zac has examined each wax-coated panel of the bee box and confirmed that all is well, it’s time for us to leave and let the bees carry on with the business of sustaining the hive. Jeff and I climb into the car, but Zac hangs back to dispatch the bees that are still clinging to his bee suit.

“We’re not the most benevolent gods,” Jeff notes. It’s hard to argue with that as we watch Zac walk behind the car, smashing plucky bees left and right as they usher him away from their hive. But this sinners-in-the-hands-of-an-angry-beekeeper approach is not at odds with the obvious devoted affection Zac and Jeff have for their hive, or with their eagerness to show off the bees’ extraordinary work. Zac talks about beekeeping the same way he talks about his science or just about anything important to him – with an enthusiasm and helpfulness that makes it impossible not to get invested yourself.