To Gossip Is Human; To Math, Divine

Can we make math more human to improve mathematical skills?

Americans, especially scientifically-inclined Americans, stress out about math education in the United States. Compared to their peers around the world, U.S. students rank 38th among 71 countries when it comes to mathematics literacy. For those of us trying to recruit new scientists, mathematicians, and engineers into their workplace, this statistic is especially troubling.

Many have argued that math needs to be taught better, or at least differently. The discussion about how to best teach math is decades old and hotly contested. In fact, in the 1990s and 2000s, the heated debate was termed the “Math Wars.”

Math is hard to teach, partly because it’s abstract. A mathematical formula is hard to relate to practical situations in a way that helps students learn why they are doing what. Word problems might seem like the solution, but anyone who’s been a student can remember how hard it was to sort out the useful details from the extra information in a problem about a train leaving from Philadelphia.

Perhaps a solution to some of the difficulties of teaching math lies in making mathematics more human. After all, it’s more fun to talk about math—or science, or engineering—when you’re relating it to the way people interact—the way that they make friends, date, or even gossip.

Izzy Aguiar is extremely good at doing just that. A masters student in the computer science department at CU Boulder, and soon to be a PhD student at Stanford, Aguiar has undertaken many projects that combine mathematics with sociological phenomena.

In fact, she calls her work “humanistic mathematics” because she believes we can use math to predict aspects of human behavior. This is a form of “modeling,” or using mathematical equations to predict how situations will play out in the real world. For example, Aguiar has attempted to model a real-world situation that we’ve all experienced: the spread of gossip.

It’s understandably hard to collect data on how gossip spreads. To do it right, you would have to have a really good way to monitor the thoughts and intentions of a closed group of people, and then record all the information passed between individuals. Given the current state of tech, that might be in our future. But for now, we just don’t have the kind of surveillance to measure how a lie starts, how it spreads, and how many people believe that lie at any given moment.

But Aguiar and two friends, Jessica Deters and Jacquie Feuerborn, thought they might be able to model it. They thought they could try adopting a well-developed model used to study the spread of diseases: the Susceptible Infected Recovered (SIR) model. The formulas in the SIR model assume that an infectious agent (a virus or bacterium, perhaps) infiltrates into a population of people. The formulas separate that population into three categories: people who are uninfected but can become infected, people who are infected, and people who were infected and are now immune.

“They’re just really easy, ordinary differential equations that are very well-understood and really are very good at predicting how these diseases spread throughout a population,” said Aguiar. “And they do have data to back it up. Depending on the population you’re viewing or where the disease outbreak is taking place, you can actually collect data on that stuff.” 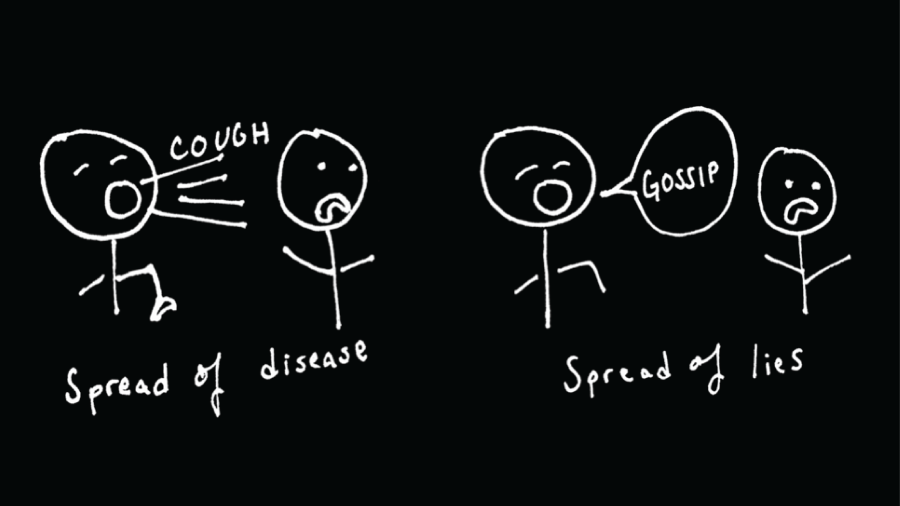 Aguiar, Deters, and Feuerborn were thinking about these models and remarked on how the language could also describe gossip. Imagine the infectious agent as a lie: if you haven’t heard it yet, you’re susceptible. If you hear it and believe it, you’re infected. And if you realize it’s untrue, you’ve recovered and won’t believe the lie if you hear it again.

The three mathematicians put together a model based on parameters (Aguiar describes parameters as tunable “dials” used to adjust the formulas) such as: how many people does the liar know? Do people believe her? How quickly do people “recover” from the lie? By plugging in different values for these parameters, you can predict how fast a lie would spread, and to how many people. 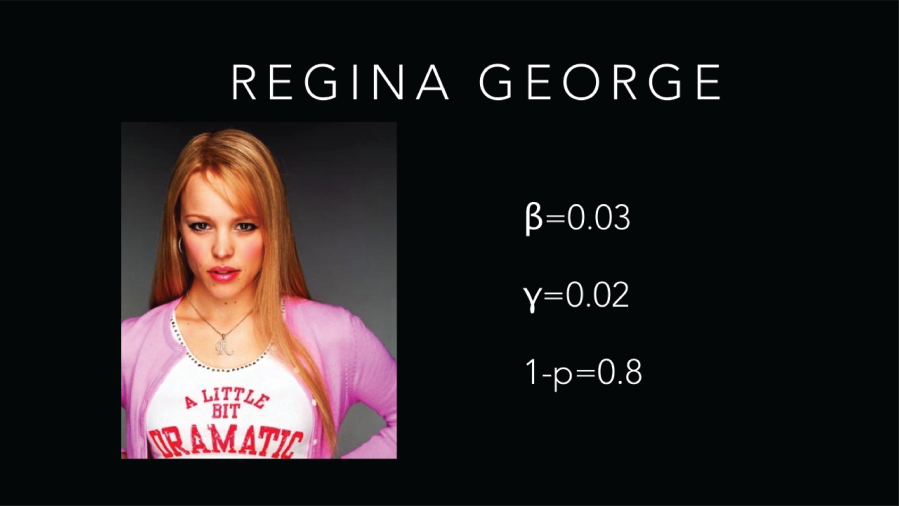 Maybe you see the value in this kind of model already. Aguiar uses the example of relationship gossip (who slept with Becky at Tom’s party?) but the implications could be much broader. Can we predict how fast “fake news” spreads? Does President Trump spread fake news faster than CNN? Do people stop believing our current Press Secretary first, or their local news hosts? My mind ran away with me quickly, but Aguiar was quick to point out that the model is not at a very useful stage yet.

“I think one of the most important things about this model, or about this example, is that it’s so not mathematically rigorous,” cautioned Aguiar. “If there was one mathematical biologist in the audience, they would be like: ‘This is kind of full of shit.’” In fields where real-life situations are being modeled, mathematicians and scientists work together to perfect the models, and to gather and analyze the data necessary to validate them. This rigor has not yet been applied to the gossip model. Although it has potential, it will need more input from scientists before it can be very useful.

Aguiar argues that the project is instead a way to explain how some common tools in math, like ordinary differential equations, are used to model real-world phenomena. And if mathematicians present a complex math problem as an interesting, familiar, and funny subject, they draw new people into the conversation.

“We teach ordinary differential equations with diseases or fluid processes or other technical things, and we were excited that we could reach new people by using this example,” said Aguiar. “We’re spreading that math can be cool!”

Sure enough, Aguiar gave a recent Nerd Night talk at Outback Saloon about her work, and the audience was enthralled. Very rarely do ordinary differential equations in a room of mostly non-mathematicians go over that well.

Aguiar is interested in how other human phenomena can be explained with “humanistic mathematics,” too. How do self-driving cars interact with humans on the road? How do humans change the temperature of a room over time? Can we use modern genetics to estimate how past populations of people spread around the world?

Math in its purest form is abstract, cold and scary. As a result, it’s hard to teach and learn. But if we bring the equations to life through the math of human relations, then perhaps math will become more relatable and easier to learn. In theory, math could be a conversation with differential equations rather than the confrontation many of us are used to. So why not let the human side show?