Thanksgiving #ThanksScience: Thanks for Parade Floats!

For more #ThanksScience articles, where Science Buffs write about the basic science behind objects we take a little bit for granted, click here.

I love the Macy’s Thanksgiving Day Parade, mostly because I have a distinctly midwestern obsession with New York. It’s an obsession that’s rooted less in the reality of the city and more in what New York represents in sappy holiday movies: possibility, romance, and the kind of wonderment and laid-back earnestness that get packaged together as “holiday spirit.” Chemistry is my job, and I sometimes feel that it squashes those ideals the second they even think about rearing their lovely heads in my heart.

When I started writing this piece about how science is to thank for the Macy’s Thanksgiving Day Parade, I figured I’d get to write about the physics of tethering all those magnificent parade balloons and maneuvering them around tight corners. But it turns out that all of that is quite technical, and anyway, who wants to talk about the ropes that hold down the balloons when we could be talking about the balloons themselves?[1] And for the balloons themselves, we have materials chemistry to thank.

Specifically, we have to thank polyurethane and its inventor, Otto Bayer, for parade balloons. You’ve spent a lot of time with polyurethane, even if you’ve never realized it. The weird fuzzy material that serves as the ceiling in your car? The little rubbery seal around the perimeter of your refrigerator door? The memory foam mattress pad that your significant other loves but that you hate because it’s way too cushy and it makes you feel like you’re sleeping in a large bowl of pudding? All of those are made out of polyurethane. Its invention revolutionized the mass production of shoes, boats, and furniture. Also, we use it to make parade balloons.

The term “polyurethane” actually refers to a whole class of molecules. To make a polyurethane molecule, you take a lot of copies of your favorite organic molecule and link them together in a long chain using a linker chemical called urethane as the glue.[2] You can control properties of the molecule, like how it behaves at different temperatures, how well it repels or absorbs water, or how rigid it is, by changing the organic molecule you make the chain with.

If you take a lot of these organic chains and stack them on top of each other, you get a material that is flexible, durable, lightweight, and pretty cheap to produce. These properties are ideal for constructing large structures that need to float but also need not to pop if a hapless bird crashes into them. 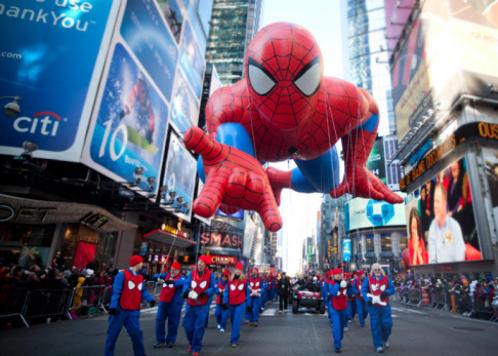 Prior to the invention of polyurethane, the balloons were made of rubber, and weren’t used for more than one parade. Before a harrowing but non-fatal collision between a cat balloon and a student aviator in 1932, Macy’s released the balloons and offered cash prizes to pilots who managed to pop a balloon with their propeller.[3] At the beginning of World War II, the balloons were melted down and their rubber was repurposed for war stuff. Now that the balloons are made of polyurethane, they aren’t released or recycled after the parade because they can fold down into a plastic tub that’s only a little bit bigger than the one my parents use to store our artificial Christmas tree.[4] This means that all the balloons used in the Thanksgiving Day Parade are stored and can be shipped to other parades for wider-spread balloon enjoyment.

The balloons of the Macy’s Thanksgiving Day Parade jumpstart my holiday spirit every year, and it turns out that polyurethanes are what makes that possible. So thanks, science for giving us these cool balloons to loom wonderfully over us and remind us that chemistry is pretty extraordinary.

[1] Actually, Rhett Allain at Wired wrote a really great, in-depth overview of the physics that make these behemoths float.