Max Levy watched the controversial new stem cell documentary so that you don’t have to. Kinda.

Something has recently emerged from a musty corner of the medical system, somehow sneaking past whoever is in charge of keeping it there: a 10-part docuseries glorifying risky medical procedures.

Rogue, for-profit “stem cell” clinics have popped all over the US, offering unregulated treatments. Clinicians claim to treat some/any/all conceivable ailments with patients’ own cells. They will remove a portion of a patient’s fat, process it, inject it, ask for thousands of dollars, and say you’re welcome. Voila, your pain is gone, your blindness is cured, your boyfriend doesn’t pick his nose anymore. 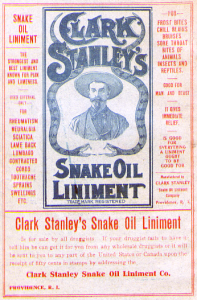 Shockingly, these claims are not backed by science. Fat-derived cells might help some tissue healing, but they can’t develop into every type of cell, per the clinics’ claims. Worse still, because some clinics inject patient cells into eyes and veins, the Centers for Disease Control has reported major problems in some cases, such as infections and blindness. The U.S. Food and Drug Administration (FDA) has gone after many such clinics, and recently won a big case. That doesn’t bode well for one major player, the Cell Surgical Network, currently facing a lawsuit from the FDA and U.S. Department of Justice (DOJ).

Last month, some actual stem cell experts—doctors and researchers—realized that interviews they believed to have been filmed for a stem cell documentary were actually used for a docu-series peddling these treatments. The docu-series is partially funded by the Cell Surgical Network and other stem cell clinic characters. Jeanne Loring, a stem cell biologist interviewed for the documentary, was “sickened” by the first episode. She and a dozen others requested to be removed from the documentary, and the producer agreed to do so.

I set out to review the series, which lauds unsubstantiated claims and demonizes regulators. Like a stem cell clinician, rather than base my analysis upon the full 10-part body of work (who would do such a thing?), I deemed it more fitting to draw my conclusions based on just a snippet. Cue the trailer.

Right out of the gate, they hit us with a strong opening sequence: vintage footage of a space shuttle launch. This is going to be deep. Cue John F. Kennedy’s famous speech, his proclamation that we should go to the moon specifically because it’s haahd.

“Everything in medicine that we know now is going to change: surgery, pharmaceuticals. And now we’re in the age of cells,” says a mysterious voice over.

Interestingly ambiguous description of what this is about, I wonder if that will be a theme here. (Yes.) Now we’re getting a fairly fast paced buffet of eukaryotic cell renderings and, my personal favorite, pipette B-roll. Slight digression: I’m always thrilled to see pipettes get some limelight in B-roll. Many of us would be useless without our pipettes.

Anyway, now we’ve got a character telling us that “cells will represent to doctors a safer and more effective and sustainable way to treat all disease that involve the generation of tissue. So that’s just about everything.” Uh oh. My friends, we have our first (alarm emoji) Red Alert (alarm emoji). These treatments do not cure “just about everything.” The sequence goes on to talk about the healing properties of “exosomes,” before another curious beat drop in this delightful summer jam: a picture with the Pope.

“Pope Benedict was very smart, and he really embraced science and how we can improve human health. The grand vision is to use cell therapy… stem cells!” Interesting segue. Not sure they stuck the landing on that one. The trailer quickly moves on to likening stem cell therapy to in vitro fertilization. In the past, they argue, IVF was considered inconceivable, but now it’s commonplace and “taken for granted.” Unlike the speaker, I can’t predict the future of stem cell therapy. But I can say that experts would argue that revolutionary stem cell therapy will involve induced pluripotent stem cells, rather than butt fat.

A new character enters the scene, Mark Hyman. You may know Dr. Hyman from his Twitter, often retweeted by @quackdetector, or from his books which appear on lists such as “Quackwatch” and “Nutrition and Health Experts You Shouldn’t Trust.” Like a true maverick, Hyman tells us that “business as usual is not going to fix the problem.”

Back to the range of treatments offered. A different doctor is telling us that has successfully treated patients with Parkinson’s and Alzheimer’s disease. Wow! The docuseries producer then asks him to confirm that these cells are being routed directly to patient’s brains. Yep.

Now the trailer veers into patient testimonials. Blindness cured. Pain eradicated. Multiple sclerosis alleviated. I am certainly not licensed, able, willing, or intending to refute the claims of these patients, and I truly hope that they feel their conditions have improved. Unfortunately, this trailer has really veered away from being a documentary, and into infomercial territory in both tone and message.

The trailer closes with apparent B-roll of a cooing baby, and a hauntingly self-assured voice announcing unironically: “Remember that the love of medicine started with a love of people, and taking care of them.”

In the time between writing and publication, this 5-minute trailer has since been removed and replaced. Such surrender to the will of experts is a welcome sight, but an uncharacteristic one for the field. It is also a largely meaningless shift. The docu-series is still up. The clinics are still open. Your boyfriend still picks his nose.