Michael is working on an art proposal that will bring STEM and art majors together. 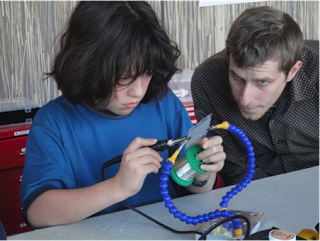 Currently a PhD candidate in the computer science department working with Tom Yeh, Michael studies how to visualize and analyze large data. With a philosophy and education background, he has a keen interest in starting a school based on democratic learning environments. He has also accomplished what many people attempt, but few succeed at: blending the worlds of science and art. In his quest to blend the two, Michael is working on an art proposal that will bring STEM and art majors together.

Michael started his undergraduate degree as a philosophy major at the University of Pittsburgh, but, as he says, the “esoteric” nature of the field made him change courses. The need to sift through a hundred years of literature keeps the subject inaccessible to those outside of academia. This barrier frustrated him and discouraged him from going into philosophy. Michael then pursued his interest in education for some time before settling on computer science as a means to create educational change.

Michael’s philosophy background is still evident in his goal to create democratic-style classrooms for middle schools and high schools. He hopes to establish one such school in the inner city of Pittsburgh so a diverse group of students can join. In a democratic school environment, students determine the curriculum with little to no interference from faculty. Students are then empowered to make their own educational decisions and follow their curiosity. Compared to the traditional K-12 educational system, Michael believes this environment does a better job of treating students as equals in the education process, resulting in happier students.

Although I was skeptical at first in how productive a curriculum run by students would actually be, he won me over; having a say over what I was learning in high school would have been vastly more enjoyable for me. In a democratic school, students vote on and decide the curriculum and the faculty cannot veto their decisions. In Michael’s school, projects will also be used as a basis for learning and standardized testing will not be used to assess students’ progress. Instead, oral exams and practical exercises, in conjunction with evaluating the direct outcome of the project will be used to determine how much was learned.
In this environment students are completely engaged in the education process and easily develop a passion for learning. Through the school, he also hopes to attract a different group of teachers—people whomight not normally go into teaching but have a true passion for their subject and serving the community. The faculty would be able to pursue their own research with graduate and undergraduate students, while keeping a strong commitment to their middle and high school students.

Michael became involved with the Alliance for Technology, Learning, and Society (ATLAS) Institute to combine his passions for STEM and art. ATLAS encourages a highly multidisciplinary environment where students explore how to make technology accessible and approachable, often with a focus on engaging with the community.  For the annual ATLAS Technology Expo in April, he and his partners Jackie Cameron and Abhishek Narula designed and presented a firefly simulation using LEDs in the ATLAS Black Box theatre.

This installation is still on display at ATLAS. Projects like this facilitate cooperation between STEM and art majors- art students create a presentation for the technical aspects that the STEM students design.  He is also working on another proposed Black Box installation allowing people to explore dataverses—data created and collected about a person online—unique to each individual. This will allow individuals to compare how they see themselves to how they are seen through their data.

What Michael does outside of school is just as interesting as what he does in it; a major hobby of Michael’s is writing science fiction. His writing is inspired by writers such as Robert Heinlein, Douglas Adams, and William Faulkner. He likes that writing science fiction allows him to play with the border between reality and absurdity. And although he is so immersed in technology, Michael enjoys the great escape that hiking provides; the desolate landscapes are a perfect balance to the constant noise of his work. He has also been learning piano for the past two and a half years.

As a cinema lover, he enjoys movies that delve into deeper levels of psychology and follows directors and screen writers including Spike Jonze, Spike Lee, and David Lynch. His other hobbies include jazz dance, visiting art shows, museum exhibits, and town hall meetings, cooking, building things—he built his own dining room table from a recycled door—and indulging in some casual gaming every once in a while.
If anything mentioned above piqued your interest, Michael will be teaching two classes this year—Democracy in the Digital Era in the fall and Data Insights in the spring. Democracy in the Digital Era is open to engineering and humanities students and will involve hands-on workshops. Data Insights will involve working with large data sets, understanding how we extract insight from them, and visual versus analytic interpretation. Don’t let your math major discourage you from your closet passion for dance or poetry—they can coexist!