NextThe Kids Are All Fight
Uncategorized

Bridget Menasche writes about the apple trees in Boulder and why scientists are interested in studying them.

A clueless volunteer, I spent the morning of September 15th, 2018 bending low to measure trunk diameters (then measure again), stretching for apples I’m too short to reach, and exploring scrub near flood ditches. Under the embrace of an early autumn sun and breeze, it was the kind of morning that can make poor lab-bound suckers like me fall back in love with fieldwork. I’d joined the Boulder Apple Blitz, a citizen science event designed to collect a deluge of data during peak apple season for the Boulder Apple Tree Project. (The Blitz returns this year on September 21st and has a sign-up form for volunteers). 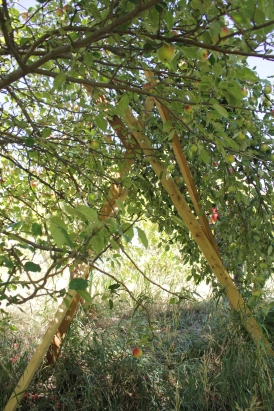 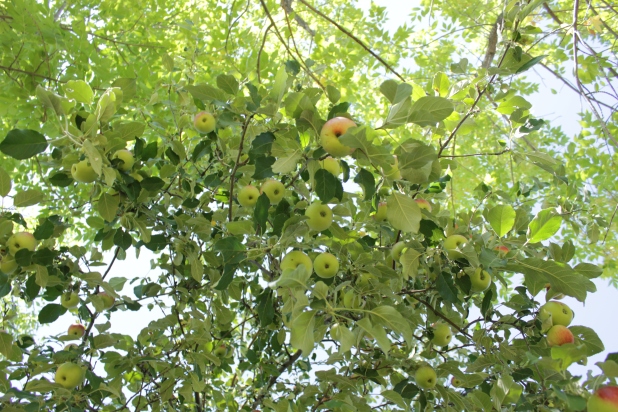 But the Apple Blitz wasn’t designed to make former ecologists sigh indulgently. It was designed to excite future ecologists and, in the process, map a huge number of heirloom apple trees, enable detailed study of urban ecology, and add depth to local history. The Boulder Apple Tree Project, run by University of Colorado Professor Katherine Suding, studies heirloom apple trees to learn how genetically diverse trees survived disease and environmental stress over the last hundred years, and plans to use those discoveries to make Boulder’s future urban forest resistant to disease and climate change.

In the late 1800s, Boulder County was rich with apple trees planted for fruit and cider, trees much more physically and genetically diverse than those filling modern commercial orchards. As Boulder swelled into a city, the trees melted into the backdrop of backyards, public lands, and irrigation ditches. These abandoned trees preserve almost-forgotten genetic diversity. They’ve survived drought, flood, disease, and urbanization. They hold clues about how genetic diversity creates trees that survive well in cities. They provide an excellent, if challenging, experimental system for studying how genetics and local climate control the time of leafing, flowering, and fruiting. They’ve grown through Boulder history, markers of our city’s past. They hold gifts for our city’s future. 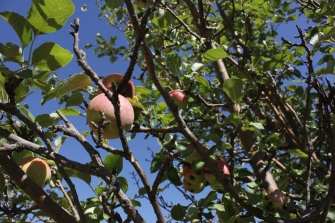 Before researchers can learn from this wealth of apple trees, they have to do some detective work. Where exactly are these trees, what are their environments like, and how should they be classified?

During the summer of 2018, Boulder Apple Tree Project researchers asked for rough info on apple trees to study. Landowners and outdoor enthusiasts responded overwhelmingly, inviting project organizers to collect data on over one hundred trees. That’s where the Apple Blitz volunteers came in. We were tasked with recording the exact location of each tree, tagging it for future study, collecting samples, and interviewing landowners for their history. Volunteers ventured across Boulder county – Longmont, Louisville, North Boulder – 44 citizen scientists, who, at the end of the day, brought home data from 243 trees.

A day in the field

Our volunteer group was guided by two grad students: Deidre Jaeger and Tina Jones, both Ph.D. candidates in the Ecology and Evolutionary Biology (EBIO) department at the University of Colorado, Boulder. Jaeger works with Professor Carol Wessman, helping to guide the citizen science aspects of the Apple Tree Project and using the data for her research on climate and urban forestry.

I collected data alongside Jaeger and her husband. During the Apple Blitz, I contributed work without knowledge or practice. I only brought the enthusiasm to participate in an experiment while not snapped into nitrile or holding a pipette. That lack of experience made some of the seemingly simple data-collection tasks a lot more challenging than I expected, like measuring trunk diameter: apple trees are more complex than they look. 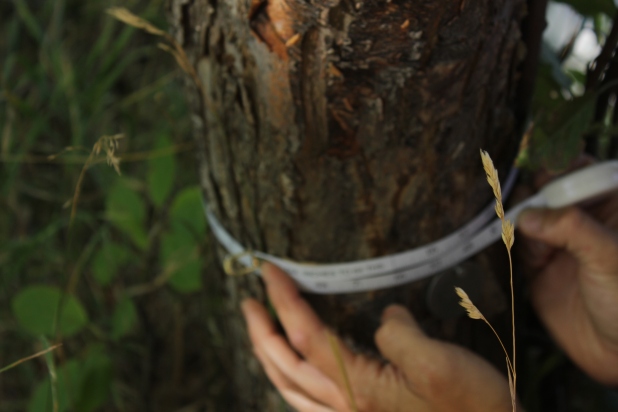 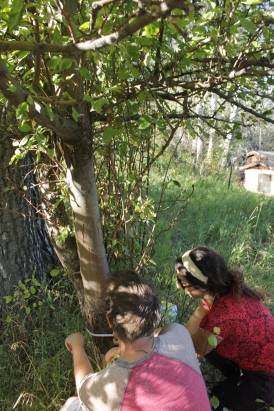 After measuring trunk diameter, we moved on to other tasks, each quicker but challenging in their own way. In order to estimate the height of the first tree, Jaeger’s husband measured about five feet up from the ground and marked the trunk with chalk, and I stepped back, closed one eye, and used the data clipboard as a unit of measure – one clipboard, two clipboard, three, four, change – ok, the tree was just over 20 feet tall if you included the last tall, leaned-over branch. At some point we lost the chalk and used a post-it to mark five feet up, or me, snuggled against the main trunk. We also estimated drip line, the percentage of turned or fallen leaves, and the presence of fire blight, then collected leaves for later DNA extraction.

During the apple blitz, the most variable features were the fruits themselves: striped pink, green, red; some perfect, some chewed through by insects; high out of reach or soft on the ground. We circled each tree for a representative batch of 8 to 10 apples – some to cut up and photograph on ruled dot paper, others to bundle in a brown paper bag and send home to the lab.

My taste of citizen science

The last task at each study site was evaluating taste. Was the apple sweet? tart? bitter? astringent? mealy? dry? soft? crisp? rotted? At first I was nervous, because the apples we sampled were small, like crabapples, and the ecological data form listed “astringent” as an option.

The flavor variation between apple cultivars comes from their genetic and practical diversity. Some have been bred to be sweet and eaten straight-up, others to be tart and intense for baking or pressing into hard cider. The balance of sweet and tart depends on the levels of starch, sugars, and acids within an apple’s cells. The amount of air between cells determines how crisp each bite is, the amount of water within how juicy, the aromatic esters wafting out carrying each cultivar’s distinct flavor. 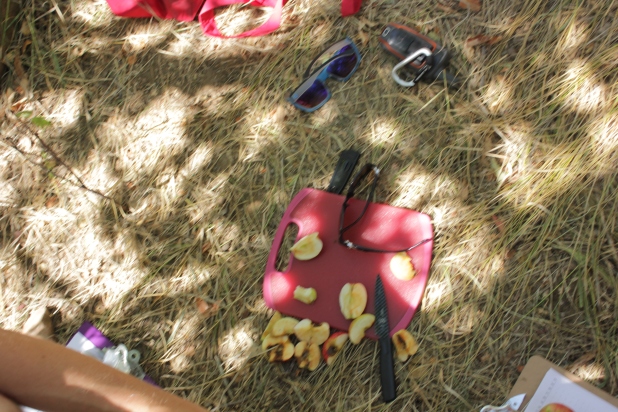 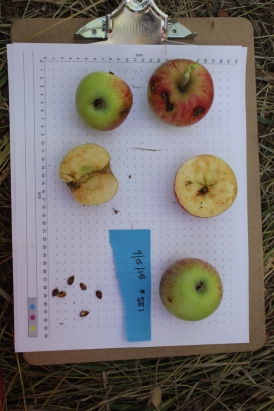 Our apple tasting went beyond a reward or a challenge. Volunteers’ notes on taste can contribute to accurate cultivar identification, an important part of the project and no small task – even when also using sequence data from leaf DNA. Descriptions of sweetness, acidity, texture, and grain can help distinguish between apples that look similar but that can be wildly different inside.

At the end of the day, we explored a long-held farm, a homestead owned by the same family since Boulder was first settled. The owner warned about rattlesnakes and showed us through the sculpture-spotted yard, back to the trees remaining from a long-past orchard. His family used to grow pears and plums here too, he said, then pointed out the only green apple tree on the property. After we surveyed that tree dripping with intense green, the owner lead us along a path raised above a creek, with trees down-bank on either side.

Red-green apples glittered the ground. One tree leaned from a high spot on the stream bank towards the walked-flat path. It was lashed in place to another, straighter tree by a thick nylon leash and held up by a crook of tacked-together 2 x 4s. Upon tasting, we knew why this tree got support and a “private property” sign from our host’s cousin. Crisp, tart, and a tad sweeter than I expected, they helped me understand why people planted apple trees throughout Boulder over a century ago.