Bridget Menasche writes about the apple trees in Boulder and why scientists are interested in studying them.

While the cultivated apple is a single species, classified as Malus pumila or Malus domestica, it contains a riot of genetic diversity. That diversity creates the subtle grades of color and taste that fill farmers’ stands each fall. It has also painted Boulder’s landscape with genetic and environmental experiments. Researchers with the Boulder Apple Tree Project like EBIO PhD candidate Deidre Jaeger are ready to pull the results.

The variation between cultivars creates a genetic experiment that can show which traits alter a tree’s response to climate and its survival in an urban environment. And this experiment makes it possible to answer a lot of questions. Which cultivars grow best at the base of the flatirons, along sidewalks, or even in ditches? How do small variations in climate within Boulder affect where different apple cultivars have set up camp around the city? And how does the extreme genetic and physical diversity of apple trees affect the arrival of spring for each tree?

Before Jaeger and her collaborators can dive into those questions, they need to sort their data by cultivar. Some of the descriptive data we took during the Apple Blitz will help, such as color and taste (see part 1). Cultivars can also be identified by comparing more careful examination of the dot paper pictures and the collected apples to historical botanical plates. Jaeger described identifying cultivars by visible qualities alone as “extremely challenging”, so her collaborators are complementing physical observations by comparing DNA sequences from Boulder apple trees to USDA sequencing data archives. 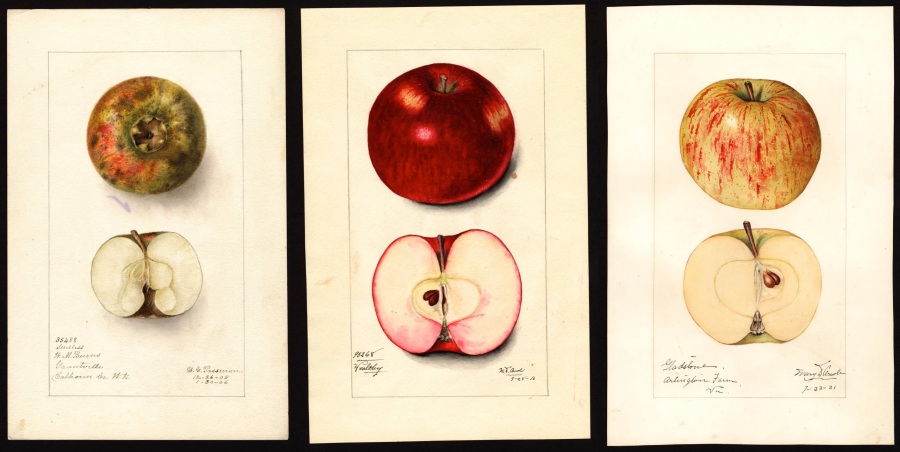 In addition to modern methods, Apple Tree Project researchers have historical resources at their fingertips. On her phone, Jaeger showed me a scan of a 1922 survey of fruit trees throughout Northeastern Colorado. In Boulder County, the surveyors described a total of 5,636 apple trees and the cultivar each belonged to. Unfortunately, a critical piece of this dataset went missing – the locations of all these trees. But the list on its own is a starting point: those apple tree types grown in Boulder a hundred years ago could still be here now.

Even the original trees might still be here – apple trees can survive one to two centuries. So which cultivars made it through a hundred years of farming, flood, drought, and urbanization?

And how will even the toughest trees respond to our changing climate?

One way to learn which trees can survive a changing climate is to study how they respond to variations in our current one. In addition to studying the genetic diversity of long-standing apple cultivars, we can also use the humble crabapple for a streamlined environmental experiment: how does a single, genetically identical type of apple tree respond to subtle differences in temperature? Temperature tunes when trees grow, flower, leaf, and fruit through the seasons. As temperatures change, so too will the trees and the environments they support.

While we usually think of apples and fall as twined together, their wave of fruit and color at the end of the year springs from their environment at the beginning of it. Spring temperatures determine when each apple tree’s first flowers, buds, and leaves appear, requiring that phenology, the study of that timing, be done in the spring.

Fleeting spring makes phenology fieldwork difficult. Instead, Jaeger brought snippets of apple trees into the greenhouse. In January, she started taking branch cuttings from 37 trees scattered throughout Boulder. Each tree belongs to the crabapple (Malus sylvestris) clone “spring snows”, planted by the city over the last 20 years. Tracking budburst and flowering of branches from the same crabapple clone will reveal how environment contributes to apple phenology without the additional factor of genetic variation. “Is the tree at the RTD station in downtown Boulder going to leaf out earlier [than the other clones] in the field and in the greenhouse?”

As a safeguard against false springs, apple trees need to experience a certain stretch of cold. Once that chilling requirement has been met, warm temperatures swiftly push the trees into leafing. By moving clippings to the greenhouse early, “we’re simulating a false spring”, Jaeger explained, and even the samples collected in late January responded – she saw budburst within a week. The timing of budburst from a branch cutting might indicate areas that have had more or less chilling. 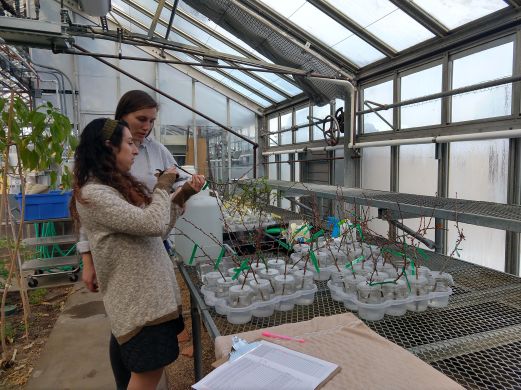 To measure microclimate in additional detail, Jaeger placed temperature recorders beneath trees around the city. Each week, she took a woody branch sample for the greenhouse budburst experiment and collected data from the temperature sensors.

“Hopefully they’re not going to get stolen,” she said, noting that environmental researchers can keep their gear from walking off by talking to the neighbors and labeling the sensor as part of an environmental study. “It’s a risk of any urban ecology experiment”. In February she planned to repeat this procedure ten times, or until the tree leafed out in the field (usually in April or May).

That’s a lot of data – Jaeger predicted she’d have 600 cuttings to observe by the end of spring. With the help of research assistants like Stine Skalmerud, an undergraduate in the EBIO department, she took data from the collected branches every three days. The buds are marked with bright gel-pen dots at their base, one color indicating red-barked new-growth buds that will form leaves, and another for buds that will form flowers. Then the developmental stage of at least ten buds, leaves, or flowers from each cutting are classified to measure progression through the greenhouse version of spring. 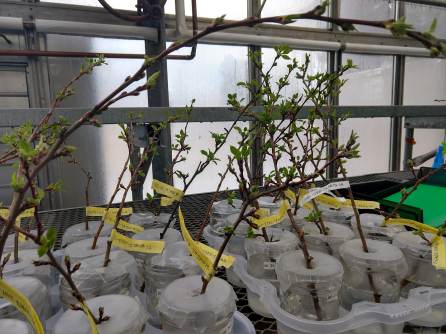 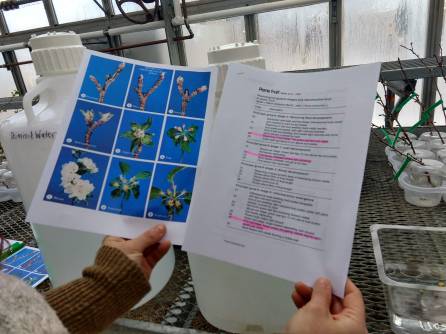 Near the greenhouse trays full of Ball jars and branch cuttings, a clipboard with spreadsheets waited, packed with tiny boxes for the incoming data. Despite the intensity of the experiment, Jaeger described entering the greenhouse as “a treat”, and “very visual, which is something I love about botany.”

Jaeger’s long rows of branch cuttings, buds appearing in a February greenhouse, made climate change visual for me. I could imagine how in ten or twenty years, our springs might not just be earlier, but different, surprising us with buds, blooms, and wilts when we don’t expect them. While climate change is global and overwhelming, it can be modeled block by block, tree by tree, within our small city. By learning what could unfurl during future springs, we might be able to respond.