Your Home Can Be Smarter

What does your home mean to you? Is it simply a place where you lay your head to rest at night? With professionals increasingly working from home and people spending more time indoors in general, how we interact with our homes, and energy use at home, is becoming an issue of great importance.

“Residential buildings account for more electricity usage in the US than any other sector,” says Kaitlyn Garifi, a PhD student at CU Boulder in Electrical Engineering. Given this massive electricity demand, there is great potential in optimizing how our homes consume electricity. Or as Garifi says, “Let’s redefine residential energy usage!”.

Garifi’s research revolves around the development of algorithms for Home Energy Management Systems. These control a subset of your electrical appliances, such as the furnace, AC unit, electric vehicles (if you’re lucky enough to own one), solar systems, and energy storage systems. They do not control the operation of a whole class of “uncontrollable” loads which includes your lights, media appliances, and general-purpose computers—the usage of these devices depend on our human whims.

Home energy management systems control those appliances whose operation (by charging or discharging energy from the grid) can be shifted in time without requiring a homeowners’ permission. Typically, operation is shifted towards periods of the day where the electricity to do so is cheaper. This approach is novel since historically the research focus on power systems has been directed towards production rather than consumption of power. And Garafi has found, research in this field can lead to some counterintuitive predictions about the benefits and drawbacks implementing home energy management systems.

Electricity prices are a key ingredient to Garifi’s algorithms. Prices fluctuate over the course of a given day in a predictable manner and are named (in order of increasing rates): off-peak, shoulder, and on-peak. The on-peak hours correspond to the brunt of the workday, from 2 p.m. through 6 p.m., while off-peak hours are 9 p.m. through 9 a.m. Shoulders are the in-between hours of these high- and low-price times.

Traditional electricity sales were at flat-rate prices daily, but time-of-use rate structures are becoming common, so Garifi explores the effect of reorienting optimization towards this a new rate structure. The expected effect is that when customers shift their electricity use (or charging of their storage devices) to off-peak hours, it can lead to massive energy cost savings for those customers. Customers save even more when they use their home-produced electrons from their solar panels during peak cost hours, rather than pulling from the grid. 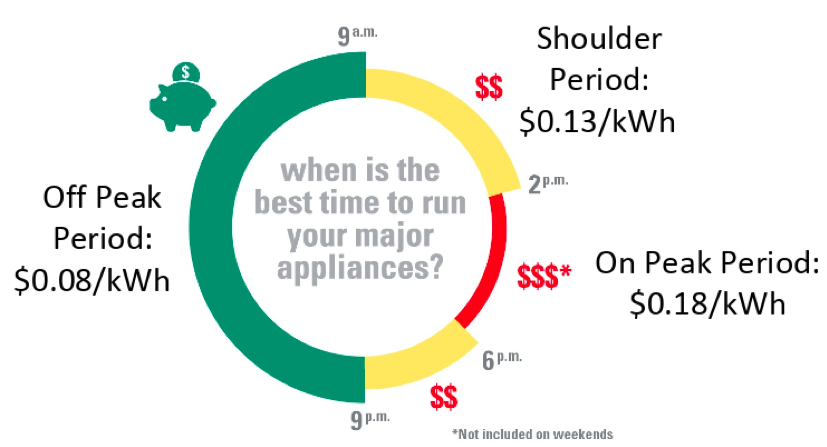 While many inputs to Garifi’s algorithms are quantitative, qualitative variables such as customer preferences (for example, can their house be temperature adjusted when they’re not around?) are also taken into account. Still, her algorithms are quantitatively based on data including utility electricity prices, weather forecasts, and the availability of controllable loads in a home.

When possible to shift demand from a time of high electricity prices to low electricity prices, her algorithm controls the switch. If there is a forecast for heavy winds tomorrow, batteries and electric vehicles will be prepped to help take in what could be an overabundance of wind. Garifi’s algorithms aim to make homes responsive to the grid and help it operate more efficiently, rather than only importing electricity from it with no forethought whatsoever.

Garifi’s model looks up to 12 hours in the future, with each hour representing an opportunity to change controls on the system. At each hour her model predicts electricity use and costs to a homeowner, and creates a schedule of when and which controllable loads should run. Optimization of the 12-hour schedule is always towards two goals: minimizing the user’s electricity bill, and keeping indoor temperatures within their specified satisfactory range.

Garifi’s work so far has validated the expectation that deploying a home energy management system in conjunction with a time-of-use rate structure will lead to lower electricity costs for that home. While this was expected, Garifi also noted that in this setup, battery systems are forced into more frequent charge and discharge cycles (to follow electricity prices). This enables lower costs, but the lifetime of a battery is often measured in cycles so more frequent cycling can be undesirable.

Other unexpected findings showed that batteries charge up to capacity during off-peak hours, which leaves them unable to absorb excess production from solar panels while the sun is shining (during shoulder and on-peak hours). Thus, batteries enable low costs but lead to inefficient use of system resources with regards to the home’s own energy production.

Lastly, Garifi noticed that the time-of-use rate structure and home energy management systems paired to create substantial peaks in electricity demand during a couple off-peak and shoulder hours. This is important because a high maximum demand can lead to inefficient use of generators, leading to higher overall carbon emissions. Furthermore, if many homes implement these solutions, it could be impossible to cover the resulting peak demands!

Lifestyles are changing in America, with more consumer products being produced every day, and more consumers spending more of their time with these products at home. Optimizing how we power all the devices in our homes, and making our homes responsive to the needs of the power grid thus becomes even more important as time passes. With solutions such as Garifi’s home energy management systems, this trend can be turned from one of worry into one of opportunity.