Honey, bee nice to your friends

Bees in tree-hanging swarms will burden themselves for the good of the group.

For the days when you feel especially impatient towards those around you, look no further than the honeybee for a dose of selfless inspiration. Sure, bees probably don’t have the capacity to tire of their coworker’s pen-drumming solos, or their roommate’s open-mouth chewing. But they do have the capacity to work together for the greater good.

When bee colonies get too large, a subset splits off to form their own colony. The bees stick together in tree-hanging superstructures known as swarm clusters, or clusters, as they scout for more permanent real estate. The cluster expands, contracts, and moves as one. This type of behavior, known as collective dynamics, has been well studied in the past. The ways that bees control their collective dynamics to suit their environment, however, have not.

In September, researchers at Harvard University determined how honeybees maintain and adapt their clusters in harsh conditions. They found that individual bees instinctively take on more cumbersome positions in the superstructure, choosing to burden themselves for the good of the whole. 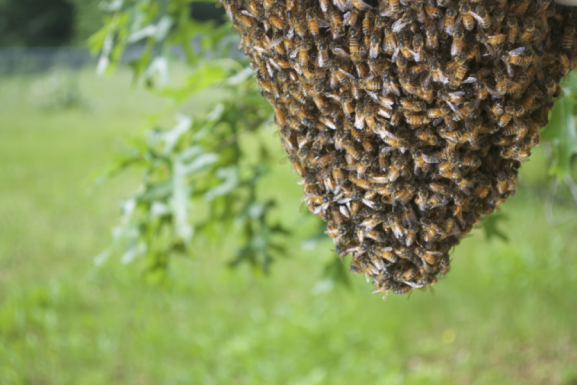 To study this phenomenon, the researchers lured bees into forming swarm clusters in a shed outside their lab. They were particularly interested in how a cluster’s shape might change if agitated by external forces.

“We could see the global structure of the swarm,” said Orit Peleg, lead author of the study published in Nature Physics and current Assistant Professor at CU Boulder’s BioFrontiers Institute. “But then by perturbing it, mechanically or in the simulations, [we could] see how the swarm responds.”

In nature, some simple individual actions, when taken together, give rise to more complex phenomena. Zooming in on the actions, we see no complex intent. But zooming out to the collection, something new emerges. Oft cited examples of this emergent behavior include ants linking their bodies to make flood-resistant “rafts”, forming ladders, and moving food in daisy chains. Honeybees have their own brand of collective dynamics.

“What seems to be common to all of them, is the fact that it is one individual that is kind of sacrificing something,” said Peleg. “That makes it harder for that individual, but kind of promotes survival of the entire collective.”

Because temporary clusters are so exposed to the elements, their behavior is remarkably adaptable to weather conditions. If temperatures get too high, the tight cluster loosens, inviting a cooling airflow. Faced with rain, bees on the cluster’s surface channel their inner roof-tile, repelling water to keep the superstructure intact. But wind presents a different threat, and Peleg knew that swarm clusters don’t simply fall apart with every gust.

In order to understand how individual bees behave in response to perturbations, Peleg and her team reverse engineered their own swarm. They strapped a caged queen to a wooden board, introduced her to eager worker bees, and watched a cluster form on the board. As is always the case in science, the set-up took some trial and error.

“The first night of experiments was a total nightmare,” said Peleg. She stressed the importance of bee-to-queen proximity. “You put them too far [from the queen], and you just end up in a shed full of lost bees.”

Her team eventually ironed out the details and settled on a set-up that worked to invite a proper swarm cluster. They also repurposed an old inkjet printer motor to shake the wooden board, along with the cluster of bees attached. (Click here to see that apparatus in action.)

Peleg found that clusters adapt in response to the moving platform. Before any shaking motion, the cluster naturally assumes a sort of hanging cone formation, at its widest along the surface above. But when she strained the cluster by shaking it from side to side, it deformed significantly over time until, after 30 minutes or so, it stabilized as a much flatter and wider cone.

Using computer simulations, Peleg confirmed that the flatter cone was indeed more stable. This meant that, overall, bees in the cluster felt less strain after reconfiguring for their unsteady environment. 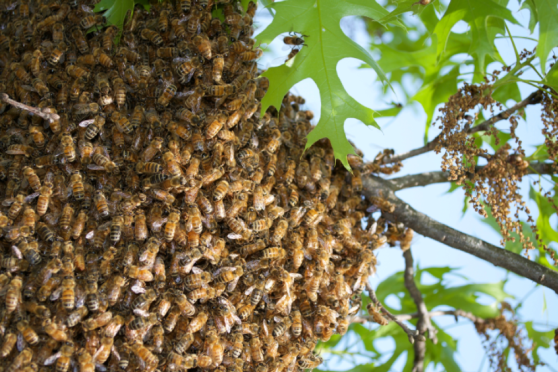 When the wooden board shakes back and forth, this creates a strain throughout the mass of attached bees. The cluster’s bees are connected, but not all feel this strain equally. Those nearest to the moving board sense the most strain—the weight of a swaying superstructure clinging to their little bee legs. Rather than hold on tight or simply abandon ship, a critical portion of the bees instinctively moves upwards towards regions of higher strain.

“That actually makes it harder for the individual being, going up the gradient,” said Peleg. “But for the entire swarm, it is making the whole thing more mechanically stable.”

So how do these 10,000 bees know what to do? Of course, they probably don’t. What’s more likely is that they simply act instinctually. The selfless honeybee appears to step up for the greater good.

But Peleg is careful not to paint honeybee evolution with a broad, human brush. “Why this was evolutionarily beneficial is actually a very loaded question, especially in biology. I didn’t mention the term altruism exactly because of that.”

Peleg noted that this work could be used to refine artificial intelligence and mechanical engineering design principles, and she casually alluded to “swarm robotics.” Her work provides fundamental insight into evolutionarily important behavior at a time when honeybee vulnerability to a rapidly changing climate is clear. “Of course [honeybees] are also struggling. So the more we understand about bees, the better,”  said Peleg.

I asked her whether she has drawn any lessons from the bees that might apply to our own existential threats. “A connection to humans? Probably not.” But Peleg was quick to volunteer a connection to human towers popular in Spain. And with the honey-tinted glasses earned only by years spent watching bees, she laughed and added, “It’s basically like a honeybee swarm but upside down.”