Colors of the Sky: Part 3

How humans affect the color of the sky

One of my favorite things about hiking in Colorado is the assorted colors I encounter: the trees are beautiful greens (or red and yellow in the fall!), the rocks are covered in red and browns, and the sky is a mix of different blues and grays. The sky looks extra beautiful on my hikes, and one thing that strikes me is how different the colors are when you look in different directions. Now, I’m an atmospheric chemist and I know a lot about the sky, but one thing I did not understand was why the sky is so many different colors. Why is the sky light blue in some places, dark blue in others, and sometimes gray? Why isn’t the sky ever green? What about sunrises, sunsets, and rainbows?

I spent some time looking into these questions. And so, without further ado, Science Buffs presents: Colors of the Sky, part 3. (Click here for part 1 and here for part 2.)

Part 3: Particles, Humans, and How We Affect The Sky

There other things in the sky besides water droplets and small molecules, and they also affect the sky. Particles can be either naturally emitted from dust storms, or created by plant and animal emissions among other processes, or from humans through fossil fuel combustion among a plethora of other activities. They don’t just affect human health (the USA has adopted PM10 and PM2.5 standards which regulate the particles that humans are exposed to- that’s how bad they can be). Particles also affect the color of the sky.

Why does the sky have different shades of blue across it?

If you look at a picture of the sky I took on a hike (above), it’s obvious that the bottom of the sky is light blue and as you look further up, the blue color deepens. This can be explained by Mie scattering and the distance light has to travel to reach our eyes. Mie scattering is much like Rayleigh scattering but it happens when the particles doing the scattering are the same size or bigger than the light, so all of the colors scatter the same way. That means that the white light does not separate at all, and we call that Mie scattering.

Figure 1: Mie scattering happens when the molecule or particle the light interacts with is large, so the different wavelengths don’t get scattered in different ways.

Mie scattering happens with particles in the atmosphere, like dust. When you are looking straight out, there is more atmosphere that interacts with the light and thus more particles and molecules for the light to scatter from. We see the blue because that wavelength of light is the most efficiently scattered. As you look out into the horizon, the light that reaches our eyes is scattered more by particles and that gives the light a more progressively white color. When you look straight up, there is less atmosphere, so there are fewer particles to scatter all of the light, so you’re left with a deeper blue (Figure 2).

Why are clouds white?

Cloud color boils down to Mie scattering. When the particles scattering light are approximately the same size as the light, all the colors bounce off the drop at the same time and at the same angle. Therefore, the colors don’t separate at all and the light remains white. Notice that unlike a rainbow, there is no reflection inside the cloud droplet because a cloud droplet is much, much smaller than a rain droplet. So clouds are white because 1) you have much more water so all that scattering tends to cancel itself out, and 2) cloud droplets are not big enough to have the reflection. Light does not enter the water droplets as it does for the larger rain droplets. Instead, the light scatters (bounces off).

Ok, now what if the entire sky is more a pale blue or even gray?

Figure 3: A gray sky is indicative of a polluted area

I was flying out of my hometown, Fresno, California and Figure 3 is a picture I took. What is with the grey/ pale blue of the sky? That phenomenon is also caused by Mie scattering. Remember, particles have to be present in the sky for Mie scattering to occur because particles are the same size as the wavelength they scatter.

If you live in a city where the sky is almost entirely pale blue, that means that a lot of particles are present that scatter so much of the sun’s light most of the sky ends up with a white tinge to it. Where do all of those particles come from? Long story short, pollution. Lots and lots of pollution, coming from cars and factories and other human sources.

Why are smokestacks black? 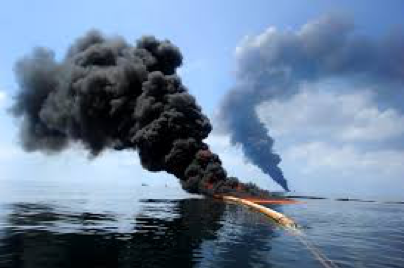 Figure 4: This oil spill has a lot of carbon in it, so it burns really black

Burning materials that contain carbon in them (like wood, fossil fuels, and anything else people burn, really) creates these compounds called black carbon. That’s just a fancy word for soot and ash. Soot is a very efficient absorber of light and all efficient absorbers look black. A smokestack that releases a lot of this black carbon is going to appear black (Figure 4).

The darker black the smoke is, the more black carbon there is in the compound being burned. This is different from factory smokestacks, which are often white. Those smokestacks really act just like clouds because of the amount of water present in the smokestacks. While there are oftentimes toxic vapors in there, they don’t absorb and look ‘clear’ and the water gives an overall white color.

Why are there ugly brown clouds above cities?

If we keep introducing pollution in the Earth, we will keep dulling the sky into these ugly colors, giving us one more reason to keep our air clean!

What do we know now?

Human beings are changing the sky by introducing haze and other light absorbing particles. This is an active area of research and every day, papers get published elucidating these effects just a little more. As we learn more, it’s important to pay attention and advocate for policies if need be to remedy some of the more dangerous effects. Besides having an effect on the aesthetics of the sky, many of the resulting particles from human-made processes are harmful for our health, often responsible for or enhancing respiratory issues like asthma. In the past, when these issues came up, we responded well (hence why there is regulation for air quality), and we just have to remain diligent regarding the air we breathe.

I’ll get off my soapbox now. Next week, we learn about all the colors that we do NOT see in the sky. It sounds funny, but there is a lot of absence of color(s) in our sky that deserves a shoutout.