NextStarve a Fever, Feed a Cold: Fact or fiction?
Uncategorized

Colors of the Sky: Part 2

Have you ever wondered what makes a double rainbow?

One of my favorite things about hiking in Colorado is the assorted colors I encounter: the trees are beautiful greens (or red and yellow in the fall!), the rocks are covered in red and browns, and the sky is a mix of different blues and grays. The sky looks extra beautiful on my hikes, and one thing that strikes me is how different the colors are when you look in different directions. Now, I’m an atmospheric chemist and I know a lot about the sky, but one thing I did not understand was why the sky is so many different colors. Why is the sky light blue in some places, dark blue in others, and sometimes gray? Why isn’t the sky ever green? What about sunrises, sunsets, and rainbows?

I spent some time looking into these questions. And so, without further ado, Science Buffs presents: Colors of the Sky, part 2.

By Zachary Decker and Aroob Abdelhamid

We know from Part 1 that light scattering causes the main colors of the sky, but what does it take to get all of the colors to appear at the same time? It can be tempting to think that it’s light scattering gone wild, but it actually has to do with another wonderful kind of matter in our atmosphere: water droplets!

Look up! You might see a quantum mechanical rainbow.

What is a rainbow?

Rainbows, you might notice, primarily happen after rain. It’s not a coincidence! Rain droplets are very large. How large? Let’s compare an average molecule size that scatters light with a rain droplet. An air molecule is approximately 1x 10-10 meters (that’s a decimal, ten zeros and then a 1). The most common rainbows we identify occur with droplets that are 1x 10-3 meters. That means our water droplets are 10 million times bigger than an air molecule.

Water droplets can be different sizes, and when they are large enough they are great prisms. This means they separate light out very well, and they reflect light inside them. If droplets are too small (like air droplets are), rainbows can’t happen; too large, and the drops fall down to Earth as rain. Just the right size, though, and physics can make a rainbow.

In fact, you tend to only see rainbows after it rains because you need a lot of water droplets to see this effect. Normally, if it hasn’t been raining, there are not enough large water droplets for us to see them. The small water droplets that are present can’t create a rainbow.

And it’s not just enough to have a rainstorm to see a rainbow, you have to be oriented in the right direction. The sun has to be behind you for you to see the rainbows because of the angles needed to reflect the light in the right way (Figure 1).

Figure 1: The sun must be behind you to get the right angles

Light enters a water droplet in one angle, and in the prism of the droplet, the light is refracted and dispersed (bent into another angle and separated) into its colors depending on what angle the light hit the rain drop at. Then the light reflects off of the inside of the droplet and comes out the other side, now separated into various colors (Figure 2). How does that happen? Here is where we introduce some quantum mechanics. 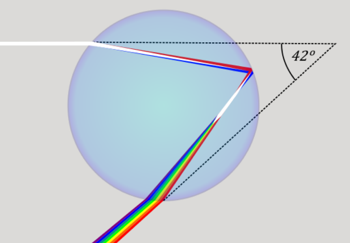 Figure 2: Light reflects off the inside of the particle

Light is both a wave and a particle. Why? Because us humans never developed language to explain such a property, so we must use two different ideas simultaneously to explain it. By extension, we never developed language to accurately describe atoms, molecules or even ourselves, since we also have wave-like properties. Light’s particle-wave duality causes different wavelengths of sunlight to interact with the air/water interface in different ways. Each photon color has a different length (a wave property), and thus a different amount of energy (a particle property).

When the photon strikes the water droplet it slows down, which shows up as a change in direction (it’s a wave thing). Due to a difference in their initial energy, red photons change direction less than violet photons when they reflect off of the droplet. 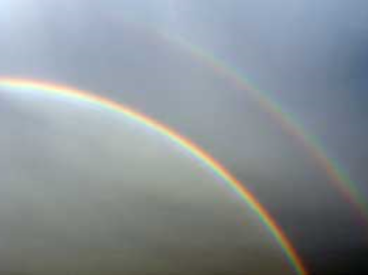 Interestingly enough, if you have multiple reflections within the water droplet (imagine the process above happening many times before the light exits the water droplet), you can get double and even triple rainbows (Figure 3). You can imagine that the second rainbow is less bright because with each reflection, you lose more and more of the light. 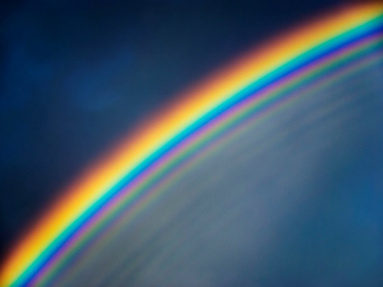 Okay, but how come we don’t see these extra rainbows all the time? Well, this phenomenon, dubbed “Supernumerary arcs” is very rare. Imagine two photons racing toward the same water particle, but from different directions. If the conditions are just right, the two photons can collide, and exit the droplet in the same direction eventually hitting your eye at the exact same point at the exact same time. Since some photons had to travel further inside the droplet then others their waves are misaligned, or out of phase (another wave thing).

Imagine our sprinters again. This time, they all start with their leg movements in sync (in phase), but at the finish line their leg movements will be out of sync (out of phase) because the runners traveled different distances around the track. If the photons are in phase (constructive interference), the light brightens: a new rainbow appears! If the photons are out of phase we see nothing, or a gap between rainbows.

Not every part of a rainbow shines brightly, though. The sky is brighter inside the rainbow than outside. You can see this in figure 4. The sky around the rainbow is darker than the rainbow itself. Why? Remember that light has to enter the water droplets at the perfect angle for us to see the light. If it does not hit the water droplets at this precise angle, then that light is not refracted as well. That makes the light less bright because the refraction is not at as strong.

Remember that there are water droplets everywhere. Therefore, the brightest spots are the spots where the light is refracted well, and this dictates where the rainbow shows up. Everything else is a “bad” angle. In fact, if you look at a double rainbow, the band in between the two rainbows is extra dark because you have the same effect two-fold. That is, you have the light being refracted poorly from the top rainbow making the area underneath that top rainbow dark, and the light from the bottom rainbow is also being refracted poorly, making the area above that bottom rainbow dark too.

Normally, there are other molecules in the sky that are refracting light, but with the number of water droplets that are reflecting light poorly, the region in between the two rainbows appears extra dark (Figure 3). This dark spot is actually called ‘Alexander’s dark band’ because Alexander of Aphrodisias was the first person who documented it. 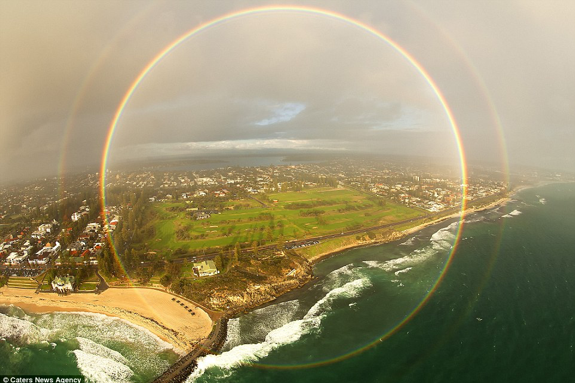 Finally, rainbows aren’t actually arcs. From the ground you can really only see half of the rainbow because the Earth gets in the way of the other half. It’s really a giant circle (Figure 5), but from the ground only half is visible. The closer you are to the horizon, the more of the circle you would see. Very serendipitous people get to see these circles of color: usually they are pilots in an airplane (passengers have windows that are too small to really see the whole thing) or they happen to be seeing a rainbow when the sun is very low in the sky.

The point is, next time you see a glass of water, thank that water for making our sky so colorful after rain!

What do we know now?

This week we learned that rainbows are caused by sunlight interacting with water droplets. Because water droplets are so big (millions of times bigger than an air molecule), instead of scattering light, light enters them and quantum mechanics plays out in the water droplet and the colors come out of the other end! This creates certain requirements for seeing a rainbow involving angles, and if you get your angles just right (here’s looking at you airplanes), you can see the entire rain-circle (not a bow, but a circle). Now we have the basics of a natural sky, but what happens when humans put their fingers on the scale of the colors? What do we see then? Come back next week to learn about the fascinating ways we change the colors of the sky!